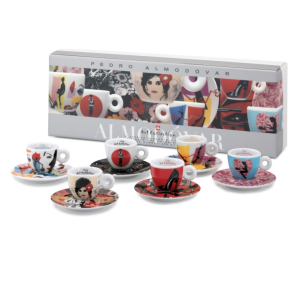 Almodóvar’s six-cup series – each entry paired with an equally vivid saucer -- takes inspiration from six of the famed Spanish director’s most admired films; Women on the Verge of a Nervous Breakdown (1988), Tie Me Up! Tie Me Down! (1990), High Heels (1991), The Flower of My Secret (1995), Bad Education (2004) and Volver (2006). The images refer to the most well-known works of the master, both in palette and style. The cups’ designs were created by Juan Gatti, an artist who makes graphics for the film-director’s creations.

Internationally acclaimed actor, script-writer and director Pedro Almodovar was born in 1949 in Calzada de Calatrava in the Mancha region of Spain and is best known for his films portraying the tumultuous transformation of post-Franco Spain. His entire body of artisitic work can be veiwed as an extraordinary allegory of the contemporary world, portrayed through women and love, desire, passion, family and individuality as metaphors for life. His films are widely distributed and much-admired by audiences the world over.

Please note ALL gift sets are thoroughly checked before dispatch and ilcaffe.com.au are not liable for any damage incurred through transport and do not recommend leaving the goods @ front door if no one is home to sign for them.